Dear Students
Dewanhat Mahavidyalaya, Cooch Behar was established in the academic session 2007-08 to cater to the academic needs of the students of the locality, thus fulfilling a long-standing demand of the people of the area. The college started functioning from 13.06.2007 in the premises of Dewanhat High School. Later it was shifted to the MSK building at Balarampur Road. At present the college is running in its own building at Balarampur Road. It was shifted to its own building on 01.01.2009. The foundation stone of the college building was laid by the then Secretary of the Organising Committee, Sri Jnanendra Chandra Chanda. In 2012 the Governing Body of the college was formed as per the statute of the University of North Bengal. The President of the Governing Body, Sri Rabindranath Ghosh, MLA, Natabari Constituency has provided financial assistance to the college from his MLA LAD Fund for the construction of two class rooms in the first floor of the college and for the purchase of text books in the college library. Work is underway for the construction of a new building in the college campus with the fund provided by "Uttar Banga Unnayan Parshad". The college has received various grants from the State Govt. in recent years to improve the infrastructure facilities of the college. The college is included under 2(f) of the University Grants Commission Act. New subjects like Geography in B.A. General Course and History in Honours Course have been introduced from the academic session 2013-14. The college will continue to strive for attaining academic excellence in particular and for the all-round development of the students in general in future.
I take this opportunity to offer my best wishes and deep affection to all the students of the college. 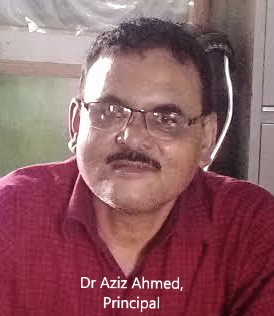